A new Ethernet virtual Network Interface Card (vNIC) that has default settings may replace the previously existing vNIC, causing network issues after you apply this update. Any custom settings on the previous vNIC persist in the registry but are unused.

To fix this issue, run the VBS script that’s provided below. Copy and paste this in notepad and save with .vbs extension.

Before you run the script, make sure that you back up the following registry key and subkeys:

Note that restart of the server will be required after executing the script.

There are unofficial reports that KB4088876 having the same issue on Windows 8.1/2012R2. GPins is reporting that it’s not only the vNIC is affected:

It’s not just the vNIC that is affected.

From a conversation I just had with VMware, it apparently resets the PCI bus which winds up re-enumerating some of the virtual adapters. Some of the devices come up fine, others don’t

A couple of the systems I have, have multiple drives on multiple luns running paravirtualization interface got re-hashed as well as the NICs. As such the MS SAN policy wouldn’t let the drive come on automatically, had to go in and ‘Online’ the specific volumes in question and then rebooted to assure it stayed up. I will need to go in and disable that specific policy during my next maintenance window so if the volumes get re-hashed again I don’t have to worry about them coming online properly. 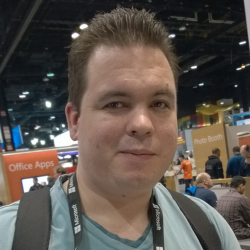 Branko Vucinec is a Systems Administrator, with experience managing On-Premise, Hybrid and Cloud environments up to thousands of seats, calling himself a 'forever student' to stay in tune with latest IT trends and strategies. And he is always interested in a challange. Reach out to my LinkedIn profile to connect!